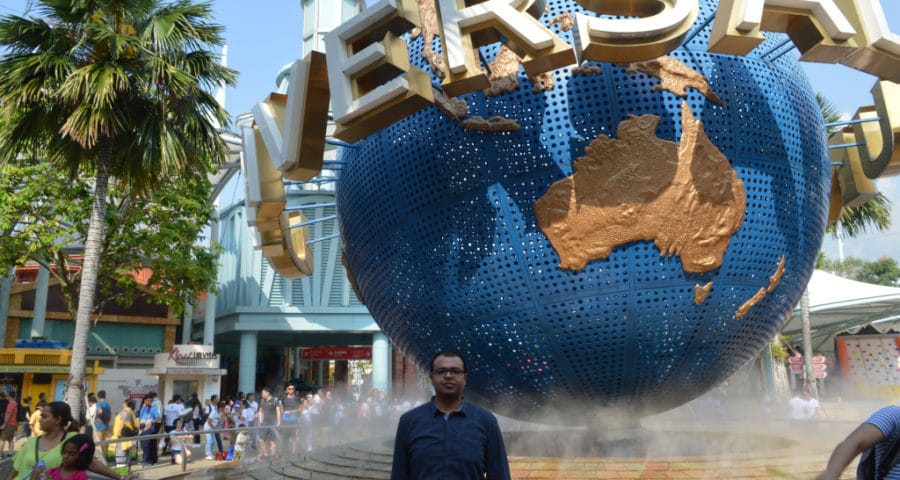 Day 3 in Singapore and today it was my turn to visit Universal Studios, Singapore – a theme park located on Sentosa Island.

A brief history of Universal Studios – USS or Universal Studios, Singapore is a theme park located within Resorts World Sentosa on Sentosa Island. The park opened on 18th February 2010 and is a one-of-its-kind theme park in Asia. It is open from 10 AM – 7 PM on all days. It is roughly 25 kms from Changi Airport, Singapore.

I won’t go into the details of all the 7 zones however, I will mention the activities and rides I indulged in during my stay at Universal Studios, Singapore.

I started with the Hollywood zone and there’s was nothing much here except the Hollywood setting. The minions retail outlet was a good experience with a lot of minions merchandise. Kids are surely going to have a great time here. There’s also a magical mirror section here that makes you look fat, slim, tall, short once you stand in front of it.

The first ride I went for was Madagascar: A Crate Adventure. It’s a water boat ride with state-of-the-art animatronics, digital projection and surround sound housed within the hull of a displaced cargo ship. The ride was truly amazing and you can expect to get a little wet (very little in fact) but overall I would rate the ride as 5/5. There’s a surprise at the end which I would want you guys to check it out for yourselves.

Next up is the Far Far Away zone inspired by the hit Shrek franchise. The main attraction is the 40-metre tall Shrek castle which looks amazing from the exterior. Trust me, it is the most beautifully built castle I have ever seen.

I enjoyed 2 of the attractions here. The first one was Shrek 4D adventure which is a stereoscopic show with added physical effects. The show is based on the story of Shrek and his quest to save Princess Fiona. 5/5 stars for this amazing adventure show.

Next in line was the “Donkey Live” show which is a live performance using digital puppetry technology. It features the “Donkey” entertaining and engaging guests in a conversation in an intimate theater setting.

After this comes the most awaited section: The Lost World: Jurassic Park. It consists of the Canopy Flyer – a suspended roller coaster, Jurassic Park Rapids Adventure, Waterworld – a live show, Amber Rock Climb and Dino-Soarin’.

The queue for the Rapids Adventure was too big but was moving fast. I stood in the queue and by the time my turn came, the weather thought to play spoilsport. It started to thunder accompanied by lightning and as a safety measure, all the outdoor rides in the park were suspended until the rains stopped.

Dejected, I went to the next section – Ancient Egypt. The Ancient Egypt zone consists of Revenge of the Mummy: The Ride – an enclosed roller coaster in complete darkness, Treasure Hunters and a couple of F&B outlets. The Revenge of the Mummy ride had a wait time of almost 90 mins and I decided to skip it. The Treasure Hunters was closed due to the rains.

Dejected again, I went to the Sci-fi City zone which features the world’s tallest pair of duelling roller coasters Battlestar Galactica Human & Cylon. There’s also a Transformers 3D ride which is again an enclosed ride. The waiting time here too was 70 mins and I thought to have an early lunch and wait for the rains to stop.I went to the Oasis Spice Cafe located in Ancient Egypt.

I went to the Oasis Spice Cafe located in Ancient Egypt which is a “Halal” certified cafe and ordered a meal for two. Though slightly expensive, the food was delicious. Post lunch, I again went to the Lost World zone to see if the Jurassic Park Rapids Adventure ride was operational or not only to be returned back with a negative response from the USS staff manning the entrance.

I then quickly had a look at the stage show schedule and there was a Rockafellas show scheduled. Went there, enjoyed the show, took a couple of pics with the cast and then proceeded to the Lights, Camera & Action show by Steven Spielberg. This is one show which you shouldn’t miss when you’re in USS.

The show lasted some 20 mins and as soon as I came out, the rains had reduced and it was time to again head back to the Lost World. Luckily this time, the gates were open and I joined the queue. After standing in the queue for almost 1-1.5 hrs, my turn came and I thoroughly enjoyed the ride. I wanted to go back and enjoy the ride once again but a quick look at the queue turned me off and I decided to head to the next ride/activity/show.

Our driver was supposed to pick us up at 5 PM and the last ride that I went was the Spaghetti Space Chase. Though a ride meant for the kids, I had a great time here as well.

Before returning back to my hotel, I clicked a few more pics. Took the exit, went to the basement and headed back to my hotel completely satisfied and with some awesome memories of Universal Studios, Singapore.

Will I come back to Universal Studios, Singapore? Well, given a chance I would for sure. It is one hell of a place for kids, men, women, children alike.

Thanks Universal Studios, Singapore for some awesome never-to-forget memories.